One place I often meet gun curious people is in the Sociology of Guns seminar I teach at Wake Forest University.

As I have for the past four academic years, I am currently teaching the seminar this semester. A PDF of the current syllabus is available, as are my dozens of posts on previous year’s classes. 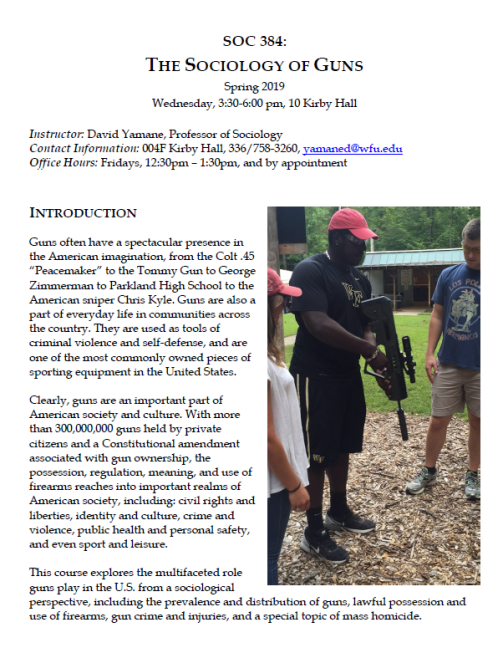 Although some students come into this class resolutely pro-gun or anti-gun, the majority are not strongly committed one way or the other. They just want to learn more about the role guns play in society.

Unlike most sociologists who study guns, I do not focus primarily on gun violence, crime, or control (although those topics are covered). Rather, the course seeks to explore the multifaceted role guns play in the U.S. from a sociological perspective.

Among the books I often assign is The Gun Debate by Duke University professors Philip Cook and Kristin Goss. They begin with an important observation: “firearms serve a variety of useful purposes but are also subject to misuse” (p. 1).

My approach to guns, especially in my Sociology of Guns seminar, seek to capture both sides of this coin.

A question Cook and Goss pose is one my gun curious students and other gun curious people I meet grapple with: “How can we reduce the problems of misuse while preserving the benefit of normal prudent use?”

This question, more than many other, may be the essence of the gun curiosity.