I am heading to Indianapolis tomorrow for the National Rifle Association Annual Meetings and Exhibits (NRAAM). It will be interesting to see what the vibe is surrounding the organization and (some of) its members, as the NRA has been dealing with some very public, self-inflicted wounds recently.

The NRA has long been the most visible and most vocal champion of gun rights in the U.S., and so its future if of great concern to many gun owners. Some gun owners unhappy with the current state of affairs are exercising the option to exit the NRA, pending some fundamental change, while others are staying and using their voice to foster positive change.

I am attending the meetings in part because I am the lunch speaker at the National Firearms Law Seminar which overlaps with the first day of the NRAAM. My topic is, “Gun Culture 2.0, or How a Liberal Professor Became an Armed American.”

Without spoiling the entire talk (which I hope to be able to make available on-line after the event), one of the points I will be making is that Gun Culture 2.0 is diverse and inclusive. An implication of this is that gun culture is (much) bigger than the NRA and (much, much) bigger than NRATV.

Although it doesn’t get much press, there are many in gun culture who want to “broaden the tent,” both to recognize and foster racial, sexual, gender, regional, religious, and political diversity. Among these are Tiffany Johnson and Aqil Qadir of Citizens Safety Academy.

Johnson and Qadir gave a presentation on “The Changing Face of the Industry” at the 2019 Rangemaster Tactical Conference in New Orleans. I was sorry to miss the presentation, but they were kind enough to send me their slides and earlier today I read a reflection on their session written by Annette Evans, the Beauty Behind the Blast. With Evans’s permission, I am reprinting her comments here:

Look, talking about race, gender, generational divides, and socioeconomic gulfs are hard. Tiff and Aq did it with grace and humor, while giving concrete strategies for broadening our tent as firearms owners and Second Amendment supporters.

My favorite piece? Not the part where I showed up, shortly followed by one of my heroes, Vera Koo. 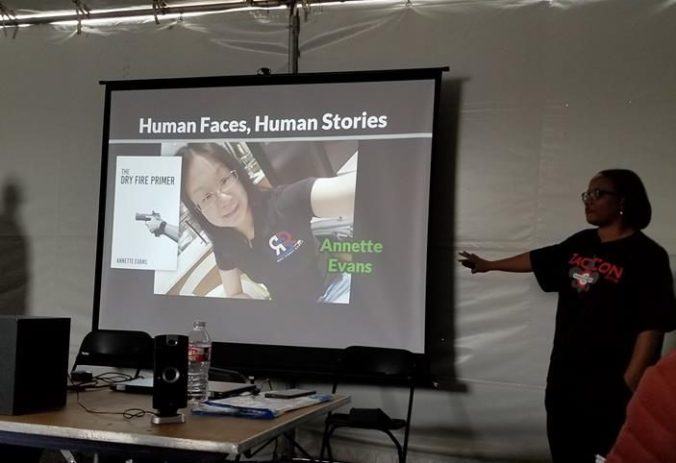 Meet people at 60%. It’s not enough to get up to that middle ground between you and someone else. Put a hand across that line and genuinely try to connect, with compassion and humility because it’s another human being over there.

Slide from “The Changing Face of the Industry,” by Tiffany Johnson and Aqil Qadir, Rangemaster Tactical Conference 2019.

When we do that, we find true commonalities and similarities. We find a way to discuss constructively rather than debate destructively. It’s not just about winning hearts and minds to “our side” so much as people helping people understand where we’re coming from. It’s about learning, in our guts, that there aren’t (usually) monsters on any side of the table. Just folks who are trying to do the best they can with their lives.

And it’s about making sure that self-defense is truly available to everyone who needs it, whether they fit neatly into the popular demographic box of the day or not.

That’s something I’ve been thinking about a lot lately, so I really appreciated how this session helped me articulate how we become more inclusive of those around us.

I have been thinking alot about taking steps toward a more inclusive gun culture, too. So I appreciate Annette Evans channeling Tiffany Johnson and Aqil Qadir channeling Tony Simon, who I have never met, but would like to.