Criticisms of the “militarization” of American gun culture are commonplace. No group has done more to attack this phenomenon than the Violence Policy Center (VPC) and their 2011 report on “The Militarization of the U.S. Civilian Firearms Market.”

In this report they, like many, allege that the militarization of the firearms market is recent and is an intentional strategy of companies needing to sell products in a shrinking marketplace:

In spite of the gauzy imagery of its advertising, the gun industry’s militarization is simply a business strategy aimed at survival: boosting sales and improving the bottom line. The hard commercial fact is that military-style weapons sell in an increasingly narrowly focused civilian gun market. True sporting guns do not.

Among the evidence they present is an advertisement for the FNH USA FN Five-Seven pistol (reproduced in their report and below).

The ad directly connects the civilian purchase of the firearm to the military’s widespread use of FNH firearms: “Built For Them, Built For You.”

As one of the only scholars (if not the only one) who has systematically studied gun advertising over the past 100 years, I found this FNH ad less scandalous than the VPC. I had seen an ad like it before in an issue of Arms and the Man (the precursor to The American Rifleman) from February 1918!

I actually discuss this Colt’s ad in the introduction to my book chapter on “The Rise of Self-Defense in Gun Advertising: The American Rifleman, 1918-2017,” published in the book, Guns: Interdisciplinary Approaches to Politics, Policy, and Practice (edited by Jennifer Carlson, Kristen Goss, and Harel Shapira, 2019).

My interest in that chapter was not militarization, but the ad is substantively the same as the “militarized” FHN ad:

You make no mistake when you follow the Government’s example and adopt COLT’S for YOUR Firearm needs.

In other words, “Built For Them, Built For You.”

In a 2019 NBCNews.com story, a gun-marketing researcher noted, “The military has always been a good way to sell firearms.” 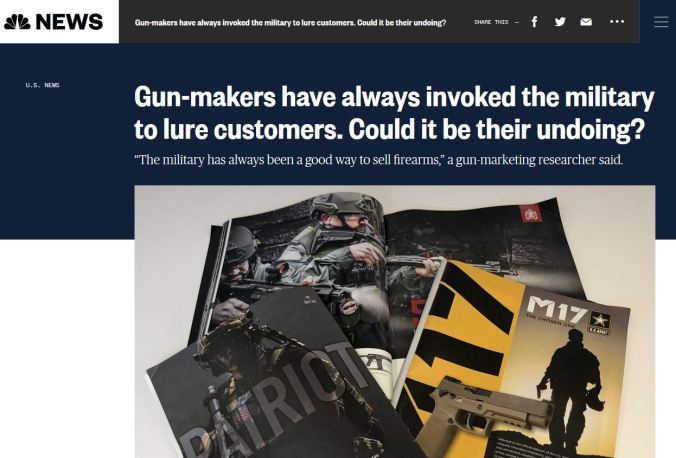 That researcher was me. And I base my claim on my studies of gun advertising, both in The American Rifleman (published) and, more recently, Guns Magazine (under review). Because those works focused on the rise of Gun Culture 2.0, I did not address the issue of militarization in them. But one of the themes we coded advertisements for during our data collection was “military.” Our operational definition was:

Product is associated with the military, officially or unofficially, through images (e.g., military-design camo) or text (e.g., “Special Ops”).

The following chart for Guns Magazine shows the percentage of advertising space that had the “military” theme from its founding in 1955 through 2019. The orange line in the background shows the actual data from year to year — including its considerable fluctuation up and down — and the green line shows the trend line that best fits the underlying data. (The R-square measures the “fit” of the line, with 1.00 being a perfect fit; this line “explains” about 30% of the variation in the data over time.)

The underlying data and the modest fit of the trend line suggests caution in over-interpreting this chart, but there does seem to be an upward trend in the use of the military to sell guns and gear (i.e., “militarization” of gun culture).

But, as the sociologist Peter Berger once wrote, “It can be said that the first wisdom of sociology is this—things are not what they seem.”

What if we expanded the time frame of our examination some, from 65 years to 100 years? Going back not to 1955 but to 1918? The chart below shows the percentage of advertising space in The American Rifleman that had the “military” theme from 1918 through 2017. The blue line in the background shows the actual data from year to year — including its considerable fluctuation up and down — and the black line shows the trend line that best fits the underlying data. (The low R-square suggests that no clear general trend exists in this data.)

% of total advertising space with “military theme,” The American Rifleman 1918-2017.

It is worth noting that we do see a general upward trend in the last part of this 100 year period, but it is no more pronounced than in the first part of the period. In fact, the highest recorded use of the military theme in advertisements was not during the GWOT beginning in 2001, but in the early 1940s, during World War II.

To be sure, the Colt’s ad from 1918 and the more recent FNH ad look very different. But ALL advertising today looks different than it used to. The fact that advertisements for guns are more visually intensive and realistic doesn’t mean that gun culture is more militarized.

When I first started studying gun culture, I too was struck by the seeming militarization of gun culture. I was particularly taken by the militarization of the police, as documented in Radley Balko’s book, The Rise of the Warrior Cop. I noted the blurring of the lines between military, police, and civilians in Blackhawk’s “Own It” ad.

What I didn’t realize at the time was nihil novi sub sole, there’s nothing new under the sun. A little bit of historical knowledge goes a long way. There may indeed be some increase in the militarization of American culture and, by extension, gun culture. But it is neither as new nor as dramatic as many, like the VPC, suggest.