Barack Obama has apparently met his match as the “greatest gun salesman in American history.” On Sunday, an acquaintance from my years wandering around American gun culture messaged me to say that he had not seen a gun buying response like this one in some 15 years in the industry.

I asked him what in particular was different and he said that it was not a fear of being unable to get a particular gun (as under Obama), but a legitimate fear of not being able to defend themselves or their loved ones.

So, under Barack Obama, especially after the massacre at Sandy Hook Elementary School, there was a fear that certain guns would be banned. The current pandemic buying spree appears to be driven more by a felt need to have a gun right now, especially among new gun owners who, according to my contact, were numerous. 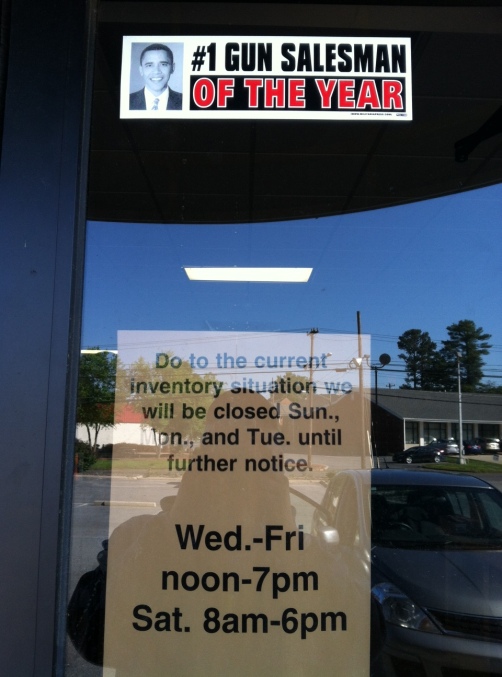 Photo of outdoor supply store from May 2013

Of course, many of us in and around gun culture have heard anecdotally from people on the front lines of this buying spree. But data is not the plural of anecdote, and systematic data on gun buying is hard to come by.

The Wall Street Journal today offered some insights into “What Sells in a Pandemic — and Doesn’t.” What sells? “Guns, Groceries, and News.”

Here are the data the story offers up:

1. “Background checks for firearms purchases were up 300% on March 16th” compared to one year earlier.

Echoing my gun store contact, the story quotes the NSSF:

“In times of uncertainty people want to know that they can protect themselves and people they love,” said Mark Oliver, director of public affairs at the National Shooting Sports Foundation, an industry trade association.

2. “Yelp reported a 360% uptick in consumer interest in gun and ammunition stores in recent weeks.”

The WSJ does not provide a link for this claim, but it was previously reported by The Verge: “US interest in guns and home fitness gear surges during pandemic.” The Verge provides a link to the original report from Yelp.

4. “Discount ammunition site Ammo.com said revenue more than quadrupled between Feb. 23 and March 15, compared with the previous 22 days. In Colorado, sales volume leapt 730% during that time.”

As I said during the Great Ammo Shortage of 2013, associated with post-Sandy Hook concerns, “it doesn’t matter how many guns you have, without ammo they are just very expensive blunt objects.” 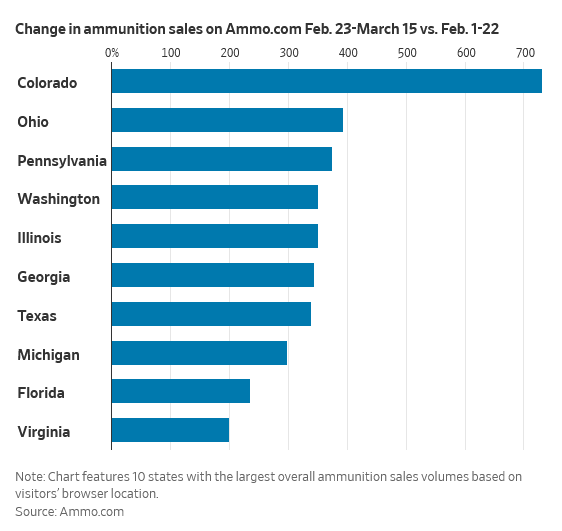 Feel free to post your own links to data or telling anecdotes in the comments.