Whenever someone asks me, “Are you a golfer?” I offer a canned response: “No, but I play golf.” I resist the label golfer. To embrace it seems to heighten expectations in an uncomfortable way.

The same can be said of the label gun owner. Do I own guns? Yes. Is being a gun owner central to my identity? Not really.

In fact, the Pew Research Center’s 2017 report on “America’s Complex Relationship with Guns” highlights differences in the centrality of owning guns to people’s identities. About half of gun owners say being a gun owner is very (25%) or somewhat (25%) important to their overall identity, and half say it is not too important (30%) or not at all important (20%).

What makes embracing “gun owner” as an identity difficult for me? For one, in certain quarters — notably on university campuses and among sociologists in particular — gun owner is a stigmatized identity.

In addition, certain strains of the gun control movement have also sought to do to gun owners what was done to smokers or drunk drivers previously: make them public health pariahs.

At the same time, some of the people who most embrace the gun owner identity are not people with whom I want to identify. Examples abound from the recent “re-open” rallies in various states.

Last, some “gun owners” are simply assholes and some are idiots. This explains the existence, for example, of a 30,000 person Facebook group called “Gun People Who Hate Gun People.”

So, there are an abundance of push factors driving me away from the gun owner identity. This highlights an interesting parallel to work in my original field of study, the sociology of religion. The percentage of Americans who opted not to state a religious preference in response to surveys doubled in the 1990s and has continued to increase since then. Many of these people maintain religious beliefs and practices even as they are classified as religious “nones.”

Although explanations for this are complex, among them is Michael Hout and Claude Fischer’s thesis that political moderates and liberals did not want to identify themselves as belonging to a religion because of negative associations of religion with the Christian Right. 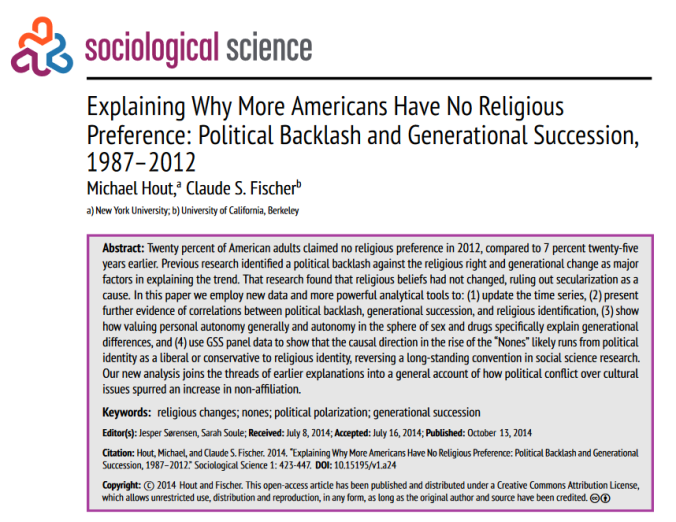 Given these complexities, we need to approach the issue of gun ownership in more sophisticated ways, both methodologically and conceptually. Matthew Lacombe’s work on the construction of gun owner as a social identity is exemplary in both regards. I discuss his article, “The Political Weaponization of Gun Owners: The National Rifle Association’s Cultivation, Dissemination, and Use of a Group Social Identity” in my next post.