The political power of the National Rifle Association (NRA) is both frustrating to and badly misunderstood by many of its critics (as I highlighted recently in response to PBS Frontline’s program on the NRA).

According to Barnard College political scientist Matthew Lacombe, much of the legislative strength of the NRA is due to its ability to politically mobilize guns owners on its behalf. And key to that political “weaponization” has been the cultivation of “gun owner” as a social identity in the first place. (An identity I reflected on from my own perspective in my previous post.)

Here I discuss his recently published article, “The Political Weaponization of Gun Owners: The National Rifle Association’s Cultivation, Dissemination, and Use of a Group Social Identity.” Unfortunately the article is not available open access, but if you would like a copy for educational purposes, let me know. 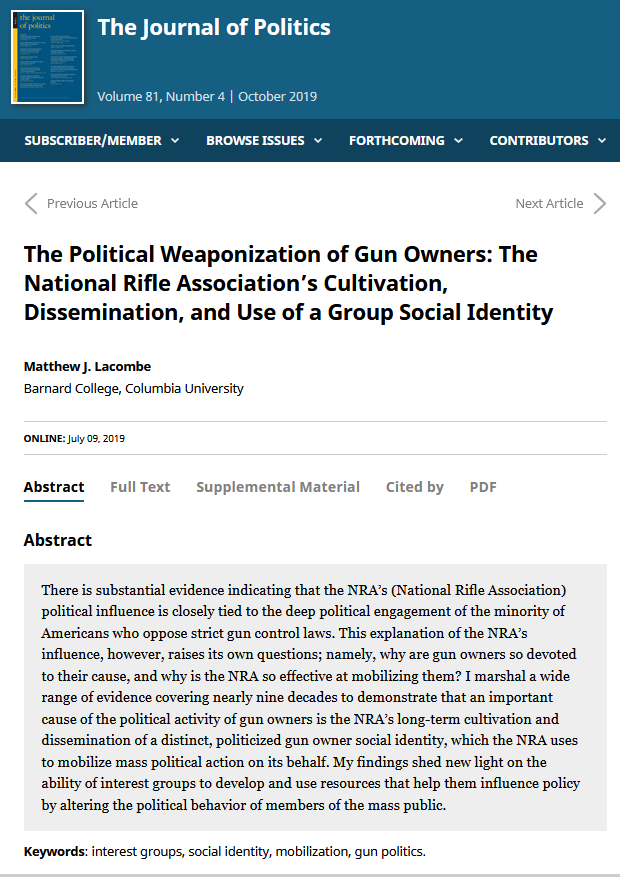 I can’t give a blow-by-blow overview of everything Lacombe does in this article (even if I understood all of his methods, which I don’t). So I want to highlight those aspects I found most interesting.

One popular social psychological theory of identity (associated with Henri Tajfel)  maintains that personal identity is grounded in various social identities which are based on social group membership (race/ethnic groups, religions, nationalities, occupations, etc.). Cultivation of social identity emphasizes in-group vs. out-group comparisons (“we” vs. “they,” positive vs. negative characteristics).

Are these same dynamics apparent in the cultivation of “gun owner” as a social identity by the NRA? Analyzing editorials in The American Rifleman, the NRA’s flagship publication, from 1930 to 2008, Lacombe answers “yes.” He identifies the central positive characteristics used to describe gun owners: “average citizens who obey the law and love America” (p. 1347).

Although these associations are very common today — I often use them myself — Lacombe rightly observes that “most of the in-group words defined above are not inherently related to gun ownership” (p. 1348). Indeed, “bad guys with guns” own guns, too. To the extent that people see these positive in-group characteristics and gun ownership as inherently related, this is a result of the conscious effort to cultivate such a connection.

Beyond the cultivation of the gun owner identity, Lacombe establishes that the identity was subsequently disseminated and politically activated. Using some advanced techniques I cannot claim to fully understand to analyze newspaper letters to the editor written by gun owners, Lacombe shows that the use of positive in-group descriptors in Rifleman editorials preceded their use by gun owner.

Whether you’re interested in the NRA’s role in politics or not, if you want to understand guns and gun culture in the US, it is important to think about the origins and dimensions of “gun owner” as a social identity beyond checking a box on a survey. Matthew Lacombe’s work provides an excellent point of entry into this complex issue. I am looking forward to reading more of it.