I have been very fortunate that my job has not been adversely affected in a major way by the COVID19 pandemic this year. Which is not to say that it has been completely unaffected. The already inadequate amount of funding I receive from Wake Forest to conduct my research is going away for the foreseeable future (much more on this in the coming months). And other responsibilities of my faculty job are squeezing out my research and writing time right now (hence so few posts here and on Gun Culture 2.0 lately, which is why I am cross-posting this to both blogs).

I have spent weeks this summer learning how to teach online, developing and teaching 2 sections of Introduction to Sociology online, and facilitating a Peer Learning Group on online education for my department colleagues.

Also, because my personal and family life has not been as disrupted by COVID19 as some of my professional peers, I have tried to say “yes” to every request to review manuscripts, books, and promotion dossiers I have received since March.

Among the assignments I have accepted is to review the book, Land, God and Guns: Settler Colonialism and Masculinity in the American Heartland (Zed, 2020), for Choice Reviews. (Choice Reviews is run by the Association of College and Research Libraries and is used by academic librarians to select materials for their collections.) 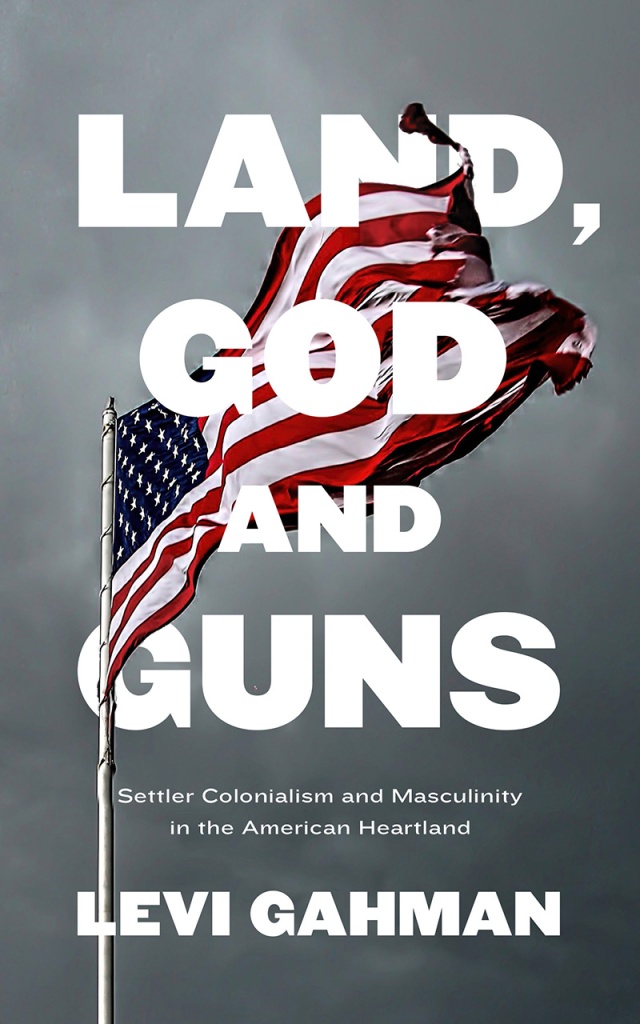 This book’s author, Dr. Levi Gahman of the University of Liverpool in England, is a white settler man from rural Kansas who approaches the issue of “settler colonialism” and masculinity by drawing not only on his academic training as a critical geographer but also as a product/survivor of the very heteropatriarchal/racist/colonialist American Heartland he analyzes.

Land, God and Guns combines extensive use of “a wide array of critical theories and political-intellectual perspectives (e.g., anti-racist, decolonial, feminist, poststructuralist, Marxist, anarchist, queer, socialist)” (p. 28) with interviews and (auto)ethnography in a densely written treatise that is intended to be not just an analysis of his chosen reality but a political intervention designed to undermine it.

Land here refers to colonial capitalism, God to patriarchal white supremacy, and guns to imperial war: “the three pillars upon which the United States of America (U.S.) was founded and rests” (p. 1). Two chapters (2 & 3) are given over primarily to theorizing, and three address the core themes more empirically, land in chapter 4, guns in chapter 5, and God in chapter 6.

Of course, I focused most of my attention on chapter 5 on guns. But even before I got there, Gahman gave some hints in the introductory chapter of what was to come. Of his relationship with his brother, Gahman writes, “We still watch Star Wars and football, as well as shoot guns together when I head back home, to Kansas, for Christmas. ‘Normal’ things that brothers and ‘guys’ do” (p. 12). The scare quotes here signaling that what is normal is going to be problematized in relation to (heteropatriarchal notions of) masculinity. So when he talks about “the normalization of gun culture in the Heartland” (p. 34), we know he don’t mean it in no nice way.

For Gahman, guns are normalized but not in the sense that gun owners actually experience. He’s not saying, as I do, that “guns are normal, and normal people use guns.” Because by chapter 5 he has exhaustively/exhaustingly established that “normal” in the context of his analysis is heteropatriarchal/racist/colonial-capitalist, being normalized means being all these things.

So, even when he makes a statement that on its face is unobjectionable, the critical glare of his theoretical perspective seems ever-present. He notes that the gun owners he spoke to highlighted the need for guns in rural areas where police are few and far between. Moreover, “guns were a farm/country tool.

That is, interviewees noted the necessity of having a firearm on ready given that outside threats include wild animals, stray vermin, or rabid predators may attack or spread disease amongst their livestock, garden, or crops. ‘They [guns] are a way to hold down the fort’ and ‘help rid the place [farm] of pests,’ as Everett, 54 years old, and Ricky, 48 years old shared; which are statements connoting that gun use makes men empowered and active agents (pp. 135-36).

Ignoring his quick pivot away from the idea of guns as a “farm/country tool,” even his notion that guns can facilitate empowerment and agency could be seen as a positive attribute (even if only in the hands of those other than white settler men).

But Gahman predictably slides straight from this statement to noting that “recent literature on gun use and manhood suggests the reasons men sometimes own guns are because of disillusionment, powerlessness, despair, and alienation they are experiencing as a result of their social standing, economic situation, and/or just ‘getting older’/less ‘able’” (p. 136). So, guns are not normal tools that people in the Heartland use to have fun (like he and his brother) and/or protect their lives and livelihoods (Everett and Ricky). They are a normalized way that men compensate for their loss of masculinity. If Gahman were a psychoanalyst rather than a critical geographer, he might just come out and say that they are penis substitutes.

The idea that guns compensate for lost white heteropatriarchal dominance is accepted as conventional wisdom in gun studies today (which I would challenge, but that is a story for another time). Although the “recent literature” Gahman cites to support this point ends in 2009 (recall his book was published in 2020), he could have cited many more recent proponents of versions of this argument: Carlson, Light, Melzer, Mencken and Froese, Metzl, Shapira, Stroud, and others.

Of course, these arguments register for me not just as a sociologist of guns, but as a human being as well. If I say, “I will do what it takes to ensure the safety of my family”—which I absolutely do say — am I adopting a heteropatriarchal/racist/colonial-capitalist perspective? Am I reproducing such a society? What if my wife says the same? Which she absolutely does. Is that her white settler cisgender heterosexuality speaking? What if it is a person (or community) who embodies every possible marginalized positionality?

More generally, who that has a family – especially children – would NOT say “I will do what it takes to ensure the safety of my family”? To me, THAT would be “abnormal.”

So, recognizing the profound inequalities of empowerment and agency that formed and continue to exist in this society, I favor extending the boundaries of normality to include as many people as possible.

5 thoughts on “COVID-Times Review of Land, God, and Guns by Levi Gahman and Related Thoughts”