Students in my Sociology of Guns Seminar are required to visit a gun range with their classmates early in the semester and to write a reflection essay based on the experience (see the assignment).

Below is the first student reflection essay for Fall 2020. 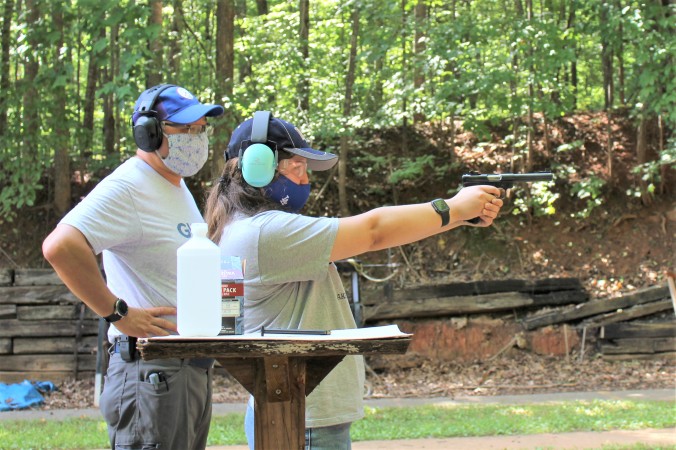 Having zero up-close experience with guns, I had the overwhelming feeling of anxiousness with a little fear as I drove up to the shooting range. These emotions felt ludicrous due to my knowledge of the prominent culture within the United States of shooting guns for fun, sport, hunting, and defense; however, I personally only have familiarity with the media and television images of school shootings, mass shootings, and gang violence.

Additionally, in the wake of COVID-19 and Black Lives Matter protests, recent coverage displays individuals in Michigan protesting COVID-19 by showing up armed to their state capital building and some citizens in Utah openly carrying firearms in a counter-protest to Black Lives Matter.

This view of guns portrayed by the media, I watch, are accompanied by growing up in a very anti-gun family. While my parents differ in political party with one Republican and one Democrat parent, guns are something that they always agreed on, even if they failed to agree on everything else in regard to policy and politics.

Nevertheless, regardless of my negative prior understanding of guns, I also felt excited to learn why so many US citizens spend their free time shooting guns. With the first gun [a Ruger Mk III .22LR pistol], I was shocked by both the weight of the gun and my ability to actually hit the target. Additionally, I was surprised at the amount of joy I felt when I first hit the target. I began to understand the delight in competing against yourself and getting better. Unlike some sports, shooting seemed, at least based on this visit, that the more time one spends practicing the more the shooter improves rather than requiring an immense amount of innate ability.

The kickback from the Glock scared me substantially more than firing the first shot. However, as I slowly began to settle into the feeling of the firing the Glock, the appeal of controlling the kickback overrode the disconcerting and initially disturbing sensation.

Finally, with the AR 15, I struggled against the weight of the gun. At the outset, I was so focused on finding the red dot and shooting at least close to the paper I did not feel the weight. Nevertheless, after a few shots, the gun started to feel very heavy on my left arm. I found this noteworthy because the gun was placed in my right shoulder, but I felt the weight on my left arm that just held the handguard. The weight of the gun in conjunction with the kickback only allowed me to fire a few rounds before starting to feel fatigued.

In the past, when I saw pictures or heard people talking about going hunting or shooting at a range, it always seemed like an activity that only requires precision; however, I learned that shooting can be a taxing sport that also requires strength. Overall, I was shocked the most by the wave of pride I felt after seeing multiple bullet holes on the target sheet, regardless of if only one hit the actual target. I almost felt as though I was on an adrenaline rush after a long run. Therefore, in contrast to my fear and uneasiness based on my prior knowledge of guns, I really enjoyed myself and had fun not only shooting but especially hitting the target. Thus, while guns are dangerous if misused, the everyday reality of guns differs greatly from my understanding based on a popular portrayal.