For the past 18 months, I have been co-editing, with Trent Steidley of the University of Denver, a special issue of the scholarly journal, Sociological Perspectives. The theme is “A Sociology of Firearms for the 21st Century.”

A major goal we had in soliciting and selecting articles for the special issue was to expand the narrow sociological literature by appreciating the multifaceted role guns play in society and culture beyond crime, deviance, and injury. This is the sort of project I called for in my original “Sociology of U.S. Gun Culture” article.

The printed edition of the journal will be available later this year, but the articles are being posted online once they are finalized. One that I am particularly proud to have had an editorial hand in is “Queers with Guns? Against the LGBT Grain” by University of Texas graduate student Thatcher Combs.

In all the years I have taught the Sociology of Guns (since 2015), I have not been able to assign a peer-reviewed sociological study of LGBT gun owners. I typically assign Rolling Stone’s story on the Pink Pistols and tell the students that some day a sociologist will give their attention to this important topic.

I am preparing my syllabus for this fall’s Version 7 of Sociology of Guns and am happy to have Thatcher Combs’s work to assign at last.

I am very pleased to announce that Trent Steidley (U. of Denver) and I are editing a special issue of Sociological Perspectives on guns. Please see the full call for papers for more information.

Proposals are due April 30th and final manuscripts September 1st. 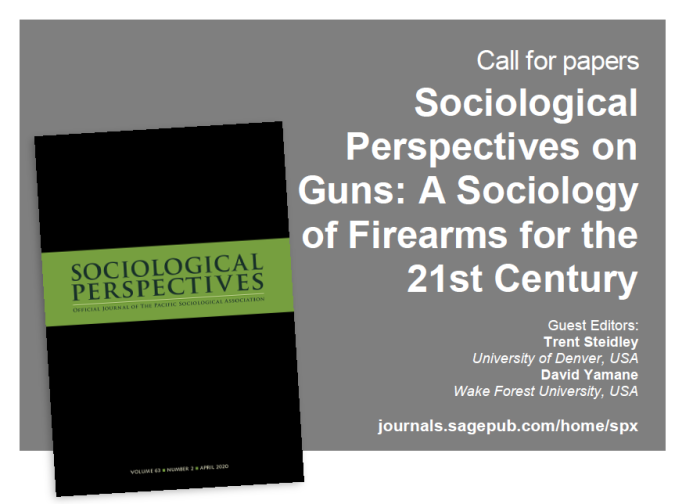