I lived the first four decades of my life completely outside of gun culture, so I remember well when I started to realize after I moved to North Carolina how common and normal guns are to so many people.

Once I was attuned to the reality of guns outside of their criminal misuse, I didn’t have to look very hard to find them all around me. I realized the annex to our local sports arena holds gun shows several times a year. I noticed ground signs advertising “concealed carry classes” on many heavily trafficked street corners. I saw billboards on area highways displaying advertisements for local gun stores. I also discovered, with astonishment, that many of the highly educated professionals I play tennis with have guns. One owns several long guns that were passed down from his grandfather. Another has two semi-automatic pistols in his basement that he used to shoot regularly. A number of the women in our tennis community also own handguns, mostly for self-defense.

My experience allowed me to appreciate the recent request of a Wake Forest University undergraduate who was working on a project for a photo journalism workshop. Isabella Kornitsky’s chosen task was to map and explain “Where to Buy a Gun . . . 8 Miles from Campus.”

She produced an interactive map that visualizes the 20 licensed dealers that exist within an 8-mile radius of Wake Forest University’s campus in Winston-Salem, North Carolina. 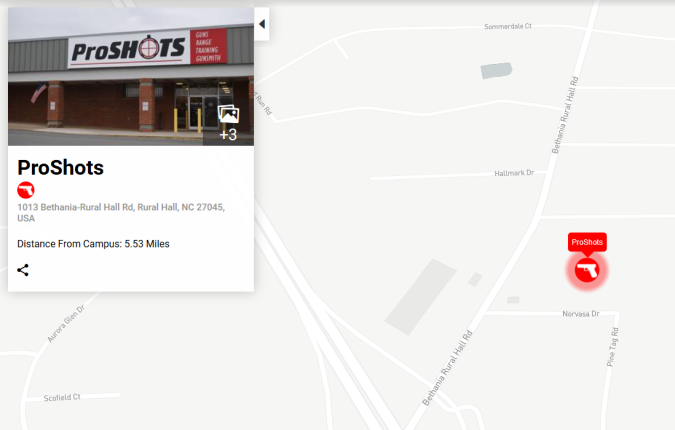 Among these are ProShots Range, where I annually take my Sociology of Guns seminar students on a class field trip, and two other gun stores (one of which is run out of a house, to Kornitsky’s surprise). Three retailers are big box outdoor stores — Academy Sports, Gander Outdoors, and (at least for the time being) Dick’s Sporting Goods — and two are Walmart Supercenters. Also to Kornitsky’s surprise, there are 12 pawn shops within 8 miles of campus that are Federal Firearms Licensees.

As part of her project, Kornitsky interviewed me and included some of my thoughts in the final product:

“I think of guns as just another consumer product,” says Yamane. “I’ve grown to not be surprised where I find them. It speaks to the business of guns, and the normality of it– people are interested in guns, they shoot guns, they own guns, so there’s stores that cater to them.”